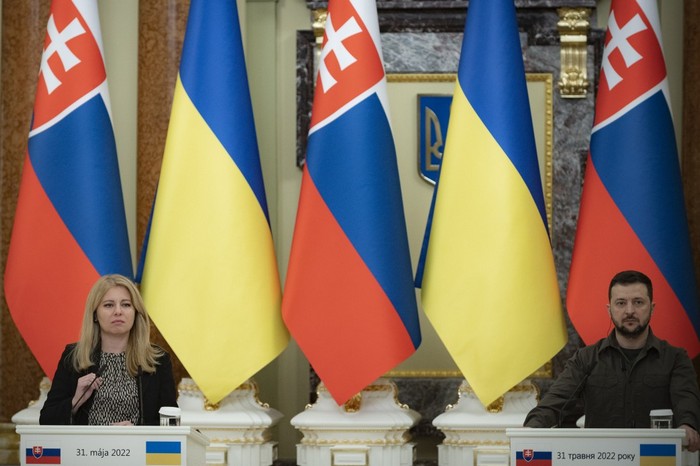 President of Ukraine Volodymyr Zelenskyy met with President of the Slovak Republic Zuzana Čaputová who is on a visit to our country.

Greeting Zuzana Čaputová in Kyiv, he stressed that Slovakia had taken a principled position and supported Ukraine from the very beginning of the full-scale invasion of the Russian Federation.

"The Slovak people fully support Ukraine and the citizens of our country in the struggle for freedom and realize that it is a struggle for our common freedom and common values of a free, united Europe," said the Ukrainian Head of State during a meeting with media representatives after the talks with the President of the Slovak Republic.

The key topics of the meeting were defense and economic assistance to Ukraine, support for granting our country the status of a candidate for EU membership, as well as strengthening sanctions against Russia.

"Slovakia's contribution to strengthening our defense capabilities is really significant. I also highly appreciate the personal role of the President in providing defense assistance to Ukraine. This cooperation of ours is based on the common vision that a reliable peace in Ukraine and in the whole of Europe is possible only on the basis of full restoration of territorial integrity and respect for the sovereignty of our state. And I was assured that Slovakia will continue to provide maximum security assistance to Ukraine," Volodymyr Zelenskyy stressed.

He also said that Ukraine and Slovakia have a common view on the need to strengthen sanctions against Russia.

"A situation where more than 50 days have passed between the fifth and sixth sanctions packages against Russia is not acceptable. It is good that we see progress in approving the EU's sixth sanctions package. I hope that the sixth package will be approved in the near future," the Ukrainian Head of State stressed.

According to him, the key restrictions that should motivate Russia to end the war should apply to the Russian energy sector as an energy weapon.

The Presidents also discussed Ukraine's European integration and agreed on further steps on Slovakia’s support for granting the EU candidate status to our country.

In addition, during the meeting the parties discussed cooperation on border infrastructure and the operation of checkpoints.

"We are moving towards the introduction of joint control at the borders of neighboring countries. We are grateful for Slovakia's willingness to help create new routes and hubs for the export of agricultural products and other critical goods from Ukraine. This is a significant support for our economy in the context of Russia's blockade of Ukrainian ports in the Black Sea and the Azov coast. Such cooperation of ours is also important for global food security," Volodymyr Zelenskyy stressed.

The leaders discussed financial support for Ukraine, Slovakia's involvement in post-war reconstruction and assistance to Ukrainians who have been forced to leave their homes temporarily due to the war.

"Today, 78,000 Ukrainians have taken refuge in friendly Slovakia, 31,000 of them are children. Mrs. President told me that more than 400,000 people had crossed the border. Almost 450,000 Ukrainians felt like home in the friendly Slovak Republic. I am very grateful for such support. Ukrainian migrants received a warm and sincere attitude. And I am confident that cooperation between our states will make it possible to do everything so that Ukrainian migrants can return home to Ukraine as soon as possible," the Ukrainian President said.

For her part, the President of the Slovak Republic noted that her visit to Ukraine is aimed to demonstrate the support for our state and the Ukrainian government.

Zuzana Čaputová said that during her visit she had visited Borodyanka in the Kyiv region and had been deeply shocked by the consequences of the Russian invasion.

"I saw concentrated evil," she said.

The President of Slovakia stressed that her country had supported Ukraine from the very beginning by providing humanitarian, political and military assistance.

"We have a clear position that we will not be able to stop Russia's aggression with medications and hygienic wipes alone. You are waging a fair defensive war, so we consider it fair to help you," Zuzana Čaputová noted.

She reminded that Slovakia had provided Ukraine with the S-300 system, demining equipment, and supported the imposition of sanctions on Russia. In addition, her country supports granting Ukraine candidate status on the path to EU membership.

"I could talk to you about how the whole democratic world looks at your courage, your determination and your personal leadership, Mr. President. This is important and valuable," Zuzana Čaputová emphasized.