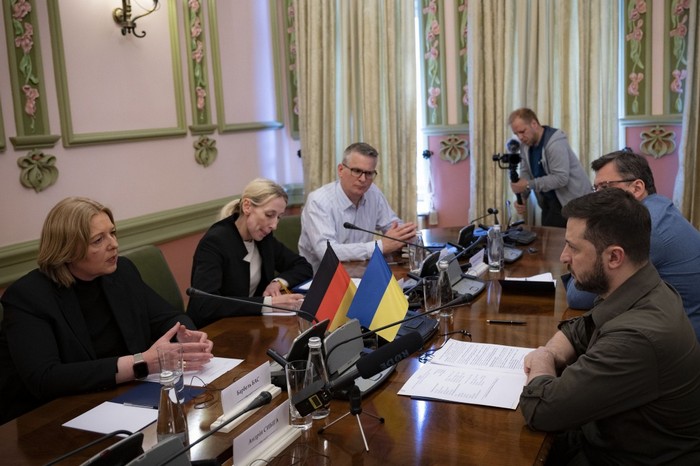 President of Ukraine Volodymyr Zelenskyy met with President of the Bundestag of the Federal Republic of Germany Bärbel Bas who is on a visit to Kyiv.

The Head of State noted the importance of her visit to Ukraine at this difficult time and on a special day - the Day of Remembrance and Reconciliation.

Volodymyr Zelenskyy thanked Germany for supporting the sovereignty and territorial integrity of our state. The President stressed that Ukraine expects from Germany a strong and confident leadership in helping our country in the fight against the Russian aggressor.

The parties discussed, first of all, further defense assistance to Ukraine by Germany, as well as the strengthening of sanctions against the Russian aggressor.

The Head of State noted the adoption by the Bundestag of a resolution calling on the German government to expand and speed up the provision of heavy weapons to Ukraine.

Particular attention was paid to the movement of our country towards EU membership. Volodymyr Zelenskyy expressed his conviction that official Berlin supports the provision of the candidate status to Ukraine.

The Head of State thanked Germany for the financial support to Ukraine's economy and called on Germany to play a leading role in rebuilding the Ukrainian territories destroyed by the Russian army.

For her part, Bärbel Bas thanked Volodymyr Zelenskyy for the meeting. She noted that it is very important for her to be in Ukraine on May 8 and to be able to honor the memory of the victims of World War II.